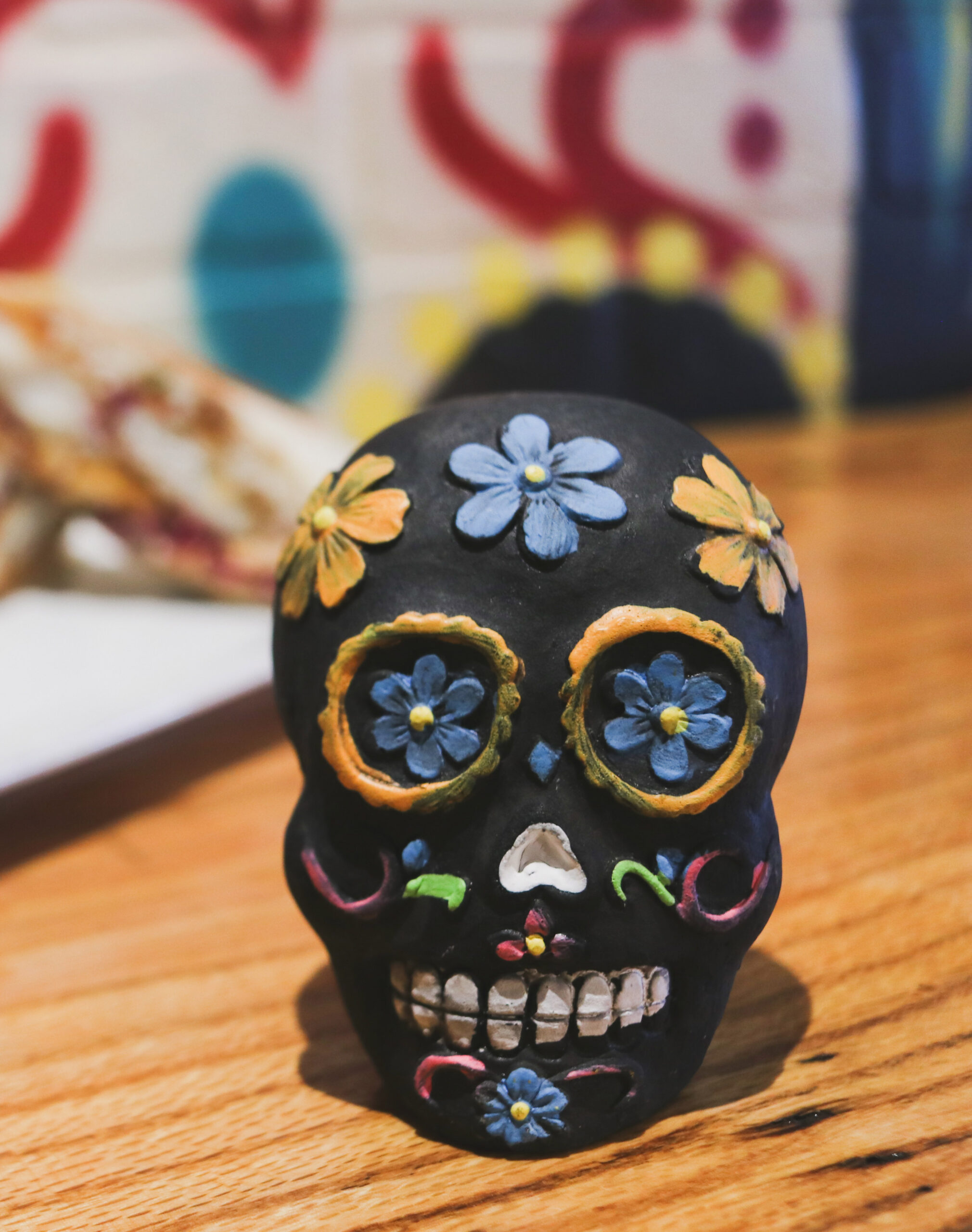 Chef Roza Segoviano opened El Catrin Mexican Kitchen with her husband Juan Segoviano as a “sibling concept” to La Catrina Mexican Kitchen which opened in New Albany, IN in January 2019.  Like La Catrina, Roza was inspired by the culture and recipes of Mexico. “It’s kind of like, every evening, when the sun starts to go down, the plaza starts to fill up with people, and the street vendors start opening up their carts,” Roza said. “You’ve got all these smells, and you just relax while you’re going around snacking. That’s what we want to do here — we want to kind of offer that same experience where you just come and relax and have some good food and some good cocktails.” 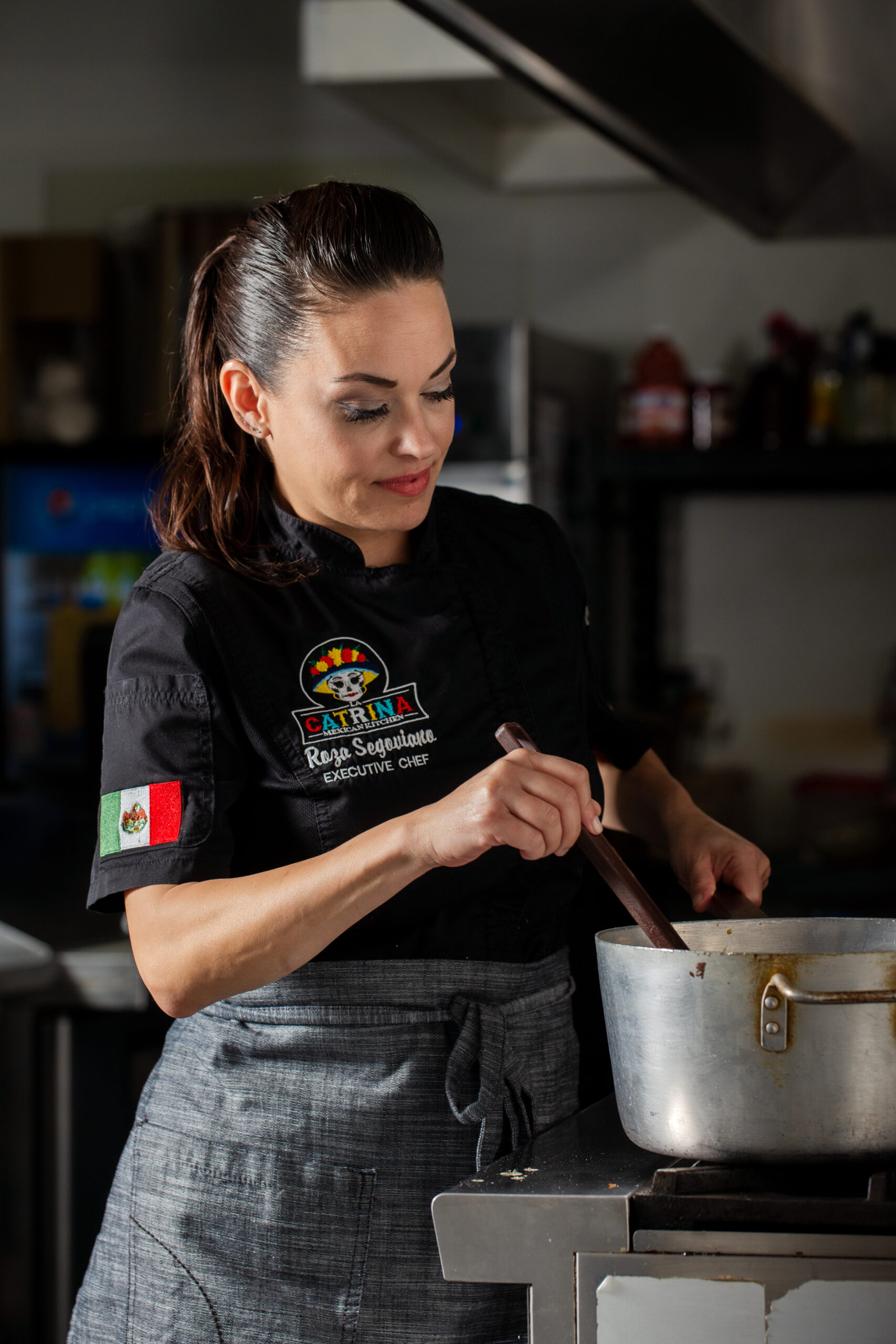 From a young age, Roza Segoviano learned some of the best memories are made around the dinner table. Growing up in Ohio, she loved helping her mother and grandmother prepare home-cooked meals. It was then that Roza quickly discovered she was her happiest in the kitchen.

Formative in Roza’s culinary pedigree was a decision in 2000 to move to her husband’s (Juan) hometown of Jalisco, Mexico. It was during these years of living and traveling abroad in Mexico that Roza fell in love with the bold flavors and complexity of regional Mexican cooking.

It was also during this time that Roza was determined to learn the time-honored techniques and traditions that define Mexican cuisine.

In 2007, opportunity arose that led to the arrival of Roza and her husband in Southern Indiana. Convinced they could use their experience and family recipes learned for the benefit of many, the mission was simple—show local residents there is much more to Mexican food than “just nachos and chimichangas.” Together they opened Señor Iguanas restaurantes mexicanos in Clarksville, Indiana with a focus on classic regional Mexican fare. In 2009 Señor Iguanas expanded into Louisville, Kentucky with two locations currently in operation.

Since that time, and as a result of her extensive travels, Roza has learned some of the best food anywhere can be found along the vibrant streetscapes throughout Mexico. Inspired by this, she and her husband set out to develop a concept that replicates Mexico’s cherished street foods along with the experience of eating and sharing in a “town’s square.” In preparation for this next chapter, and determined to further hone her culinary skills, in 2015 Roza earned a degree from Sullivan University’s storied culinary program.

At the onset of 2019, Roza and Juan opened La Catrina Mexican Kitchen in New Albany, Indiana. In order to replicate the cherished Mexican “street-vibe” atmosphere, they installed three large garage doors that open up to the city’s downtown core, and covered the walls with Dia de los Muertos-themed murals.

Roza created an a la carte seasonal menu that primarily focuses on tacos, and also includes several shareable dishes (like tamales) and hand-crafted cocktails. Each recipe is prepared from scratch using traditional techniques and forward-flavors
to serve up real Mexican food.

In 2020, Roza and her husband built on the success of La Catrina with the opening of “sibling concept,” El Catrin Mexican Kitchen, in Sellersburg, Indiana. El Catrin builds on the same Mexican street food concept as La Catrina with tacos that customers can customize, but adds to
its focus a line-up of tortas (Mexican sandwiches) and burritos. It is an expansion of La Catrina’s beloved offerings, and further opportunity for Roza to share more of her exciting street
fare favorites. It is here that Roza creates honest recipes that showcase her commitment to preserving the integrity of Mexico’s beloved street food.

Roza is a staple in her restaurant kitchens and can usually be found behind the line or testing new recipes. Outside the kitchen she is an avid reader, loves traveling and spending time with her husband and three children. A proud Southern Indiana resident, you’re likely to spot Roza
shopping at one of the area’s many farmers markets seeking the best local ingredients for internationally-focused food favorites.

WE’RE BRINGING “SIESTA” BACK!
But have no fear…after a short break from our lunch
rush, we re-open at 4:30pm for a dinner experience
unlike any other!

WE’RE BRINGING “SIESTA” BACK!
But have no fear…after a short break from our lunch
rush, we re-open at 4:30pm for a dinner experience
unlike any other!